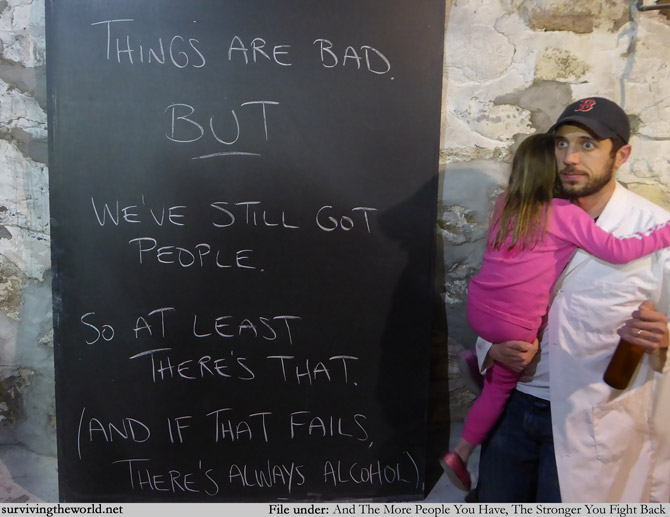 Coming up from OK Go

The boss monkey still has to give his followers bananas after he bites them!

Couple new items for you today:

Check out this awesome parody:

Wonder why Campbell’s changed their labels?  Wonder no more.

This was a really fun read, check out what happens when a 33-year-old goes back to High School.

I would like to be utterly tactless. No person, especially, one who is self declared ‘person of faith’ is going to lecture me about fantasy and lies.

These girls are in sixth through eighth grade.  Good gravy they are amazing:

As a quick wrap up to the Olympics, Virginia has a great article over at That’s Church, make sure to check it out.

Looking for good, online entertainment?  Check out this year’s nominees from the Streamy’s.  I recommend The Guild (and also The Legend of Neil), but I’ll be using the nominee list to find new programs, I’ll let you know what I find that I recommend.

Did you know that the earthquake in Chili shifted the Earth and made the axis about three inches shorter?  Which in turned shortened our days by about 6.8 microseconds.  I believe it was Carbolic Smoke Ball that took that opportunity and ran with it.

Weird confession time: I love signs.  Ask anyone who has ventured out into the real world with me, if I have my camera, I inevitably made them stop so I could take a picture of a sign.  And now Slate is running a series of articles all about signs!  I haven’t had a chance to read any of it yet, but I’m super excited!  So geeky!

Take a look at this awesome chart.  DRM may be all but extinct from music, but there’s still more to worry about, namely at the moment: books.

If you haven’t seen it yet, watch it and marvel:

I love zombies.  And I like Guitar Hero.  And I love Neil Patrick Harris and Felicia Day.  Apparently this game was made specifically for me.

See!  I told you Avatar was really Pocahontas.  Again, not that’s a bad thing, there are only so many stories that can be told.  But I will be made if Avatar wins for best editing, I thought that part of the movie was done poorly in a few spots that really stood out.

Good job, D.C!  Check out an awesome video over on Slog.  I think I read that they have been together for 13 years already, so good for them!

I love the idea of this chalkboard table, but the guy who came up with it came up with all kinds of uses I would have never even thought of!  Makes setting the table a breeze!  And no more placemats to wash!

I have to check with the Myst/URU folks, but there may be some weird copyright conflict going on here with the OA’s new program Mysterium Compass.  Mysterium is the annual Myst conference.  Yes I’m a nerd, no I’ve never gone, yes I always lobby for it to be held in Pittsburgh, and yes, I really want to go to one held in Spokane so I can get a tour of Cyan’s headquarters.

Foe everyone keeping track at home, Fucking retard Sarah Palin didn’t get a good response on Leno, it was added in by a sound engineer.  Original article here.   Again, I’m allowed to say that Sarah Palin is a fucking retard, it’s satire, just like Rush Limbaugh (did I even spell that correctly?) and Steven Colbert told me.

Another quick political thing, I love Rep. Grayson.  So much!  Watch him with crazy Bachmann (who looks frightened) on Larry King Live:

I can’t embed it, but go watch Jon Stewart take on Chat Roulette and the other news stations “investigating” it.